Yin Yang Tattoos: One of the Oldest and Most Recognized Symbols

Yin Yang tattoos are one of the most recognizable symbols in the world On the symbol, black is used to represent yin while white is used for yang. In Taoism, the symbol is a reflection of the intertwined duality in all things in nature. 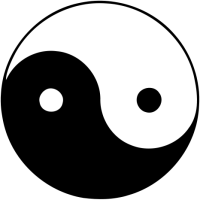 The concept behind yin yang tattoos has quite a long history. There are recorded writings of the philosophy behind the symbol as far back as 1,400 BC however, it was not until 770 BC that the popularity began to emerge.

It is suggested that there is not one quality that is completely independent from its direct opposite. This representation is depicted by the flowing boundary between the black and white along with the smaller circles left to float in their opposite’s region. There are basically six concepts that are represented by yin yang tattoos.

1. Interdependence – Yin yang tattoos suggest that one of the opposites is not capable of existing without the other. Night cannot exist without day and darkness cannot be without light.

2. Transformation – An important concept of yin yang tattoos is that at one point, yin has the ability to transform into yang and yang can transition into yin. A good example is day turning into night and life turning into death.

3. Opposites – One of the most popular representation of yin yang tattoos is that everything has an opposite yet no one thing can completely be yin or yang. This is because yin contains a seed of yang and vice verse. This can be seen when a rare summer day peeks through in the middle of winter and then quickly goes away.

4. Supportive – As yin increases, yang decreases and as yang increases then yin will decrease to maintain a perfect balance. There are possible imbalances though such as Daylight Savings Time. One forces the other to be more concentrated.

5. Subdivided – Yin yang tattoos represent that a yin or a yang aspect is able to be subdivided into the other. Every moment in time is a new beginning as well as an end.

6. Equality – The dots that are present in yin yang tattoos mean that part of yang lives within yin and yin shares a part of yang. There is always a trace of direct opposites in one another. Shadows of dark are always present in the light and the moon offers light in the darkness.

We use cookies on our website to give you the most relevant experience by remembering your preferences and repeat visits. By clicking “Accept All”, you consent to the use of ALL the cookies. However, you may visit "Cookie Settings" to provide a controlled consent.
Cookie SettingsAccept All
Manage consent

This website uses cookies to improve your experience while you navigate through the website. Out of these, the cookies that are categorized as necessary are stored on your browser as they are essential for the working of basic functionalities of the website. We also use third-party cookies that help us analyze and understand how you use this website. These cookies will be stored in your browser only with your consent. You also have the option to opt-out of these cookies. But opting out of some of these cookies may affect your browsing experience.
Necessary Always Enabled
Necessary cookies are absolutely essential for the website to function properly. This category only includes cookies that ensures basic functionalities and security features of the website. These cookies do not store any personal information.
Non-necessary
Any cookies that may not be particularly necessary for the website to function and is used specifically to collect user personal data via analytics, ads, other embedded contents are termed as non-necessary cookies. It is mandatory to procure user consent prior to running these cookies on your website.
SAVE & ACCEPT